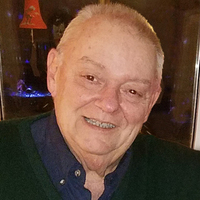 Carl Edwin Radder, Jr.75, of Dresden, passed away peacefully on Saturday, March 12, 2022, showered in the love of his family.

A Memorial Service with Military Honors will be held on Saturday, May 14 at SENECA LAKE MASONIC LODGE, MILO STREET, in Dresden at 11:00AM. A Celebration of Carl’s life will follow at the Masonic Lodge.

He loved children, especially his grandchildren and was known as a second Dad to dozens. Carl loved cooking and playing cards and had an amazing sense of humor. Carl was born in Canandaigua on March 7, 1947 to Carl and Antoinette (née Pastore) Radder and graduated from Geneva High School in 1965. He then joined the U.S. Navy, where he was trained in Electronics and Electricity. After being Honorably Discharged in 1969, he began work at NYSEG Greenidge Station in the Coal Hopper House and worked his way to Team Leader in the Control Room.  After retirement, Carl stayed on with what was then AES Greenidge, working as a Contract Employee-Consultant to the EPA. Most recently, he was employed by HEP Sales.

He was predeceased by his parents, Carl and Ann and his brother, David.

In lieu of flowers, contributions may be made in his memory to the charity of your choice. Arrangements by Weldon Funeral Home, Penn Yan.

To order memorial trees or send flowers to the family in memory of Carl E. Radder, Jr., please visit our flower store.