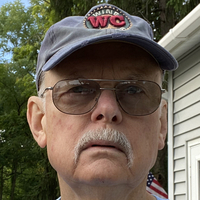 David graduated from Thomas A. Edison High School in 1965. He served in the Navy aboard the USS Independence. After returning to Elmira Heights, he worked at Brace Tool & Machine before beginning a long career at Ingersoll-Rand and Dresser-Rand. He enjoyed time spent on Keuka Lake while growing up. He shared laughter and good times with the many friends he made at Dresser-Rand, Seneca Lodge, Watkins Glen International (The Glen) and at the Vintage Grand Prix Festival in the many years he lived in Watkins Glen. David loved his Doberman Pinschers, a good joke, a cold beer, and the home he shared with Joyce. He will be missed.

A “Celebration of Life” will be held at a future date.

Memorial donations may be made to a charity of one’s choice or the International Motor Racing Research Center in Watkins Glen.

To order memorial trees or send flowers to the family in memory of David J. Brace, please visit our flower store.