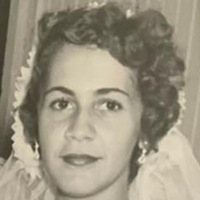 Lena was born in Panama City, Panama on February 4, 1933, the daughter of the late Javier and Antonia Duque Llorach.  She was predeceased by her husband, Richard H. Smith, on February 4, 1997.

Together, they raised 2 daughters.  As the wife of an Army Sergeant, their family frequently moved and were stationed in Colon Panama and different states.   Their family settled in Branchport, where Lena owned and operated the family vineyard in Branchport, along side her husband and daughters.  Lena later moved to Penn Yan after her husband passed away.  She was a faithful communicant of St. Michael’s Catholic Church in Penn Yan for 53 years.

There are no funeral services.  Memorial donations in her memory may be made to St. Michael’s Catholic Church.  Arrangements with Weldon Funeral Home, Penn Yan.

To order memorial trees or send flowers to the family in memory of Eudolina "Lena" Smith, please visit our flower store.