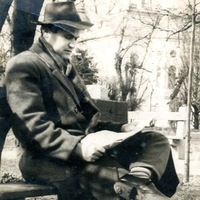 Geza "Gerry" Drommer
Age 89, of Branchport, NY, went to be with the lord on August 18, 2022.
Geza is survived by his spouse Maria, son Steve Drommer (spouse Lisa Drommer), daughter Edie (Drommer) Kirch (spouse Neil Kirch) and youngest son Joseph Drommer (spouse Leah Harkness). Grandchildren Steven Drommer, Mathew Drommer (wife Rachel Drommer), granddaughter Mckala Strong, grandson Nick Strong and grandson Joshua Drommer.
Geza was born to Joseph and Ilona Drommer in the Romanian city of Nagyvarad in 1933. He would grow up not knowing his father as a result of his death in 1935.   During his youth he would survive WW2 and the Russian occupation afterwards.  When he was 16 he lost his mother to illness and thereafter lived with his Aunts.   Geza met Maria in 1964 while he was working as a photographer.   He made the decision in 1970 to take his family and leave Hungary to move to the US. The first step in this journey was Israel, where they lived for one year in the city of Haifa. Thereafter, they lived in Greece for eight months and finally travelled to NY city in 1972 via ship.  The family resided in Queens for 3 years until Geza purchased a farmhouse on Armstrong Road in Branchport.   Geza was employed at Penn Yan Boats and later at Sylvania in Seneca Falls.  In 1983, he and his wife opened a leather store in Penn Yan which is still in operation today at its location in Branchport.
Geza had a great love for playing chess, fishing, gardening, bowling, traveling, playing music on organ, and as a result, acquiring a large collection of records.   Anyone who knew Geza would recall his appreciation of conversations regarding world culture and great food.  When Geza left NY City to find a place in the country, the Finger Lakes was the place that stood out as the most beautiful to him out of all the other locations that he searched.
The family will receive friends at the Weldon Funeral Home, 102 E. Main Street, Penn Yan on Thursday  (Aug. 25) from 5pm-7pm; followed by a memorial service at 7pm.

You may leave a remembrance or condolence for the family in his obituary at WeldonFuneralHome.com

To order memorial trees or send flowers to the family in memory of Geza “Gerry” Drommer, please visit our flower store.