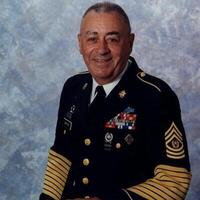 Harry Walter Watkins, of Rockledge, Florida (formerly of Danbury, Connecticut) a proud veteran of the U.S. Army, passed away on October 25, 2021, at the age of 93 in Penn Yan, New York. Harry died peacefully, surrounded by his loving children. The son of Helen and Frank Watkins, he grew up in Baldwin, New York. He was born in Brooklyn, New York and graduated from Baldwin High School in 1946. In 1948, at the age of 20, Harry enlisted in the U.S. Army. Harry valued this service highly and attained the rank of Command Sergeant Major for the State of Connecticut. As part of his 40 years of service in the Regular Army and Army National Guard, he was awarded multiple medals and ribbons including the Bronze Star in 1953, for meritorious service in connection with military operations against an enemy. He had four tours of duty, including the Korean War. One of Harry’s great loves was martial and marching music, and he played the tuba in many military and civilian bands. One of his fondest memories was marching into Ebbets Field in Brooklyn, New York as part of the Oceanside Fire Department Band in the late 1940’s. As one of the largest bands to ever march through the streets of Brooklyn, Harry said the sound seemed loud enough to break windows. Harry worked at Olin Corporation in Stamford, Connecticut for 22 years. Upon retirement, he moved to Rockledge, Florida where he was a member of the Turtle Creek Golf Course. As an avid golfer, Harry made 17 holes-in-one. He formed many friendships during his time in Rockledge and was fortunate to have the opportunity to say goodbye to his dear friends this past summer, as he began his move to Upstate New York to be closer to family. Harry is survived by his three children, Donald (Jennifer Nisbit) Watkins, Jody (Ron) Seger, and Susan (Andrew) DeSorbo, six grandchildren, James, Christopher and Michael Seger and Matthew, Kaylie and David DeSorbo, ex-wife Joy Mahler Watkins, sister Lillian (Ronnie) Gurke, niece Karen (Steve) Yeaton and their two children Jonathan and Jacqueline, and niece Kathy Field. He is predeceased by Devan Nisbit and Joel Field. Harry’s loved ones will remember his sense of humor, love of family, patriotism, self-sacrifice, generosity and grit. Throughout his recent illness, he never complained once. A service honoring the life of Command Sergeant Major Harry Watkins will be held at the Bath National Cemetery in Bath, New York, Friday, May 27, 2022 at 14:00 hours, where he will join his “band of brothers”. The family would appreciate any contributions honoring his life and service to be made to the VFW at heroes.vfw.org. Arrangements with Weldon Funeral Home, Penn Yan.
To order memorial trees or send flowers to the family in memory of Harry W. Watkins, please visit our flower store.