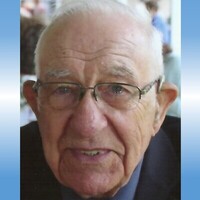 Jack was born on July 14, 1931 in Bradford, Pennsylvania. He was raised in Smethport, Pennsylvania where he grew up with his beloved mother, father, and two younger siblings. His childhood was fundamental for developing his character, work ethic, love for sports and the outdoors.

Upon graduation from high school, he went to Lock Haven State Teachers’ College on a scholarship to play football. This is where he met his first wife of 36 years, Donna Reeder who was the mother of his daughter and two sons.  After two years of studying, he enlisted in the United States Navy serving on the USS Haven as a Hospital Corpsman during the Korean Conflict. He then earned his teaching degree at Westchester College and completed his Master’s Degree in Administration at Ithaca College. He began his teaching career in Woodhull, NY where he taught physical education and coached every sport there was.

In 1960, he moved his family to Dundee, NY and embarked on his 32-year career at Dundee Central School. He served as a teacher of physical education, health and general science. He later became the curriculum chair, department chair and athletic director for many years. He left a mark on Dundee Athletics as a coach of wrestling, football, and girls’ and boys’ basketball, but his greatest love was coaching baseball. He enjoyed 29 years as the coach of the boys’ baseball team and was known for his signature use of the “suicide squeeze” throughout the Finger Lakes. He honorably retired from his career at DCS in 1992.

In 1993, he married his second wife, Donna Gibson and became an integral part of the lives of her children as well. They shared 28 years together, and his love and care for her endured until his last moments, when she came to visit him, and he was able to hold her hand one last time.

Jack was a man of integrity and resilience and left a lasting impact on the lives of his family, students, athletes, teachers, community of Dundee and beyond. He will be greatly missed, and we will joyfully remember him riding his moped around town with his blaze orange helmet and that familiar honk that let you know he was coming.

In lieu of flowers, memorial contributions can be made to: The American Spinal Injury Assoc., Attn: Carol Moffatt, 9702 Gayton Rd., Suite 306, Richmond, VA 23238, or the National Multiple Sclerosis Society (https://mssociety.donordrive.com/campaign/Jack-s-Wishes)

You may share a memory with Jack’s family by visiting his obituary at www.WeldonFuneralHome.com.

To order memorial trees or send flowers to the family in memory of Jack A. Bishop, please visit our flower store.