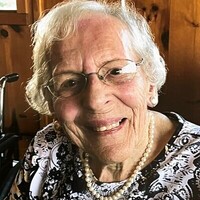 Jeannine Helen Andersen passed away at her home in Penn Yan on May 4, 2022, at the age of 92, with her loving family by her side.  There will be a private family service. Burial will be in City Hill Cemetery at the convenience of the family.

Jeannine Andersen was born to Howard and Madeleine (Bells) Henderson on February 28, 1930. She attended the Mays Mills country school as a young girl and graduated from Penn Yan Academy in 1946. She worked at Citizens Bank for a few years after graduation, but wasn't happy working inside as she had always worked outside with her Dad on the farm. Yet, it was while at the bank that she met the dashingly handsome farmer from Benton, Martin Gordon Andersen. His sister, June, who also worked at the bank, introduced them. On November 25, 1949, Jeannine and Gordon were married at her parents' home in Milo. Gordon worked with his father, Glenn, in Benton for two years; then he and Jeannine bought their farm near Himrod where they worked side-by-side, raising a family and building a good life together. She has lived there for 68 years. Jeannine's greatest love was for her children, grandchildren, and great-grandchildren with whom she cherished every single minute. She enjoyed attending her grandchildrens' school games & concerts and big family dinners on holidays and birthdays. Jeannine enjoyed gardening and baking pastries and cookies for her friends and family and each week for her church family, too. She enjoyed listening to music of all kinds and growing orchids. Since her car accident in 2008, she had suffered with vertigo, which affected her balance and caused her to use a walker since turning 88. She had to give up growing her beautiful orchids and baking her famous sweets. In later years, she enjoyed reading, watching television and couldn't miss Lawrence Welk on Saturday evenings.

During her farming years, Jeannine could be happily found driving a tractor, working with the cows or feeding her baby calves. Their youngest son, David, took over the farm operation in 1997, but she still enjoyed driving tractor until she was 85. When Gordon and Jeannine were able to get away from Norris Road, they found their memory making travels taking them to Hawaii, Florida, Cape Cod, Martha's Vineyard, the Thousand Islands, and also to Maine and Manitoba, Canada to visit family. Jeannine was a member of the Milo Center United Methodist Church, a Charter Member of the Danish Sisterhood and a Farm Bureau member.  Jeannine was pre-deceased by her parents, her husband of 63 years in 2012, her brothers Elwin and Richard, and sister Marlene. She is the last Henderson of that Generation. She also lost two great-grandsons: Caden Andersen and Brogan Converse.

In lieu of flowers or gifts of food, donations can be made to the Milo Center United Methodist Church, PO Box 299, Penn Yan 14527; Himrod Fire Department, PO Box 112, Himrod 14842; or the Keuka Comfort Care Home, Box 107, Penn Yan 14527.  The family of Jeannine Andersen would like to thank Jennifer Spears of Ontario-Yates Hospice for her wonderful and attentive care and guidance through this difficult time.

Please visit www.WeldonFuneralHome.com to send a message of condolence to Jeannine’s family.  Arrangements are with Weldon Funeral Home, Penn Yan.

To order memorial trees or send flowers to the family in memory of Jeannine Helen Andersen, please visit our flower store.