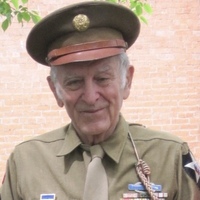 John was born at home on January 10, 1925 in Wayne, NY. The son of Alexander and Antonina Banach, he was the second youngest of seven brothers. John grew up on the family farm in Wayne.  A veteran of World War II, John joined the United States Army at age 18 and quickly saw combat in the Battle of the Bulge, for which he was awarded the Bronze Star.

In July of 1950, he married the former Norma Allison. Together, they had two children, Bonnie and John Jr. (Skip).

After returning home from the War, he attended barber school in Buffalo, NY. John settled in Penn Yan, NY, where he owned and operated the Elm Street Barber Shop until his retirement in the late 1980s. John was an active community member, having served as a trustee on the Village Board for many years, and as a member of the Penn Yan Volunteer Fire Department, including a term as fire chief. John was also a member of the American Legion, VFW, Moose Club, Elks Club.

John was a faithful communicant of St. Michael Catholic Church in Penn Yan.

Due to Covid-19 concerns, the family requests that those in attendance please wear a mask.

Interment will take place in St. Michael Cemetery in the spring at the convenience of the family.

To order memorial trees or send flowers to the family in memory of John Banach, Sr., please visit our flower store.