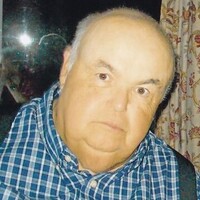 John was born October 5, 1941 to John and Rachel Guarney of Tarrytown, New York. John attended school in Tarrytown, NY , attended SUNY Cobleskill and was an Airman in the Air Force stationed in Okinawa. John enjoyed his time in the Air Force and was a table tennis champion. Upon completing his service John was a salesman and a manager for various agricultural companies. John’s love of farming began as a young boy when he would spend summers in Maryland and help on his uncle’s farm.

John is survived by his daughter Joanne (Scott) Patrick of Liverpool, NY, his daughter Susanne Guarney (Peter Testan) of Brockport, NY, his grandchildren Anthony and Zoe Patrick of Liverpool, NY, his sister-in-law Jane (Neal) Oden of Gaithersburg, Maryland,  his niece Amy Oden of Baltimore Maryland, and his loving extended family and friends. John was predeceased by his wife of 53 years MaryAnn Guarney in September 2019.

John loved playing table tennis, bowling, golfing, and fishing. His love of bowling is how he met his wife MaryAnn. They enjoyed many years bowling together on couples’ leagues and he enjoyed his men’s leagues. John’s love of fishing led him to become a Captain and he spent years taking charters out onto Lake Ontario out of Sodus Point. John was an active member of the Lion’s Club in Chatham, NY and in Penn Yan, NY.

The family wishes to convey their sincerest gratitude for the care and support shown to the family by Clinton Crest in Penn Yan, NY and Sunnyside Care Center in East Syracuse, NY. The family will hold a private ceremony to remember John.

Donations in John’s honor can be made to the Penn Yan Lions’ Club, PO Box 663, Penn Yan, New York 14527 in support of their various community projects and programs. Arrangements with Weldon Funeral Home, Penn Yan (WeldonFuneralHome.com)

To order memorial trees or send flowers to the family in memory of John P. Guarney, Jr., please visit our flower store.