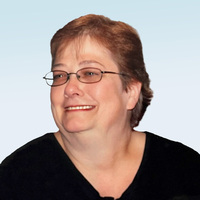 Lorie was born April 5, 1962 in Ridgway, Pennsylvania, the daughter of Robert and Thelma

(Brechtel) Byrd. She was raised in her hometown of St. Marys, PA, along with her five siblings, in a small, three-bedroom home that would remain with the family until her brother’s passing in 2019. Lorie would eventually join the Army in 1981, but was honorably discharged the same year due to an ailment that would lead to permanent hearing loss and a lifetime of her children repeating themselves.

In 1985, she was married in her hometown to Dave Fleming (Cyndi Jepsen), and later moved to Penn Yan, NY following her husband’s career at Seneca Flight Operations. She considered both places home. While they later divorced, Dave remained a close part of Lorie’s life together raising their two children.

Her family and friends in Penn Yan remember her kindness, her years working at the Penn Yan Elementary cafeteria, and her many other jobs and volunteer positions in the community. Some of Lorie’s closest connections were built sharing her hometown favorite meal of homemade sauerkraut and pork on mashed potatoes; nothing brought friends closer than the aroma of rotten cabbage. It is through Seneca Flight, her employment, neighbors, and volunteer work that she would find lifetime friendships as close as family.

She was a proud mother, and although she would say that her children were her proudest accomplishments, she was also a dedicated aunt, guardian, and godmother to many whom she loved dearly.

In a 1996 feature in the Finger Lakes Times she stated that the virtue she wanted to pass on to her children was “to respect others and their feelings and to enjoy life to the fullest. Whatever they choose to do, she wants her kids to enjoy it and be happy with it.”

She was predeceased by her parents and a brother, Donald Byrd.

According to her wishes, there are no funeral services. Memorial donations in her memory may be made to Milly’s Pantry, 19 Main St., Penn Yan, NY 14527 (or online at www.millyspantry.org)

To order memorial trees or send flowers to the family in memory of Loretta Fleming, please visit our flower store.