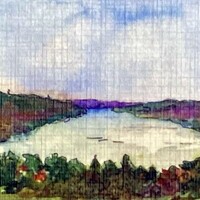 Mabe was born May 29, 1927, in Penn Yan, New York, the daughter of Alexander Fraser MacKerchar and Martha Ten Brook MacKerchar. Named Mary Elizabeth, her brother John changed her name to Mabe as it was easier to say. She was a proud graduate of St. Michael's School and Penn Yan Academy, where she was a cheerleader for the undefeated 1944, wartime football team.

A Funeral Mass will be celebrated at St. Michael’s Catholic Church, 312 Liberty St, Penn Yan on Thursday (June 17) at 11:00am.  The family will receive friends and relatives at the church from 10am-11am; and interment following funeral at St. Michael’s Cemetery.

Mabe worked for New York State Electric & Gas in Penn Yan, where she met her husband Robert (Bob) Sorensen. They married April 11, 1959, and lived in Penn Yan, Waterville, Walton, Ballston Spa, and Clarence, New York, with Bob's transfers with NYSEG, and moved to Lockport after retirement. In Walton, she was a trustee of the William B. Ogden Free Library. Mabe was an active member of the Niagara Frontier Watercolor Society and had many paintings accepted for juried shows of the Society, receiving several awards. Her paintings were exhibited at the Keenan Center in Lockport and the Visual Arts at Chautauqua members show at the Chautauqua Institution. The photographer David Moog included Mabe in his portraits of Western New York artists, Artists Seen: Photographs of Artists in the 21st Century, now in the collection of the Burchfield Penney Art Center at Buffalo State College. Mabe also began writing stories of her childhood in Penn Yan. Her latest story, "The Visitor," was published in the November 2020 issue of Bluff & Vine, a literary review of the Finger Lakes. Mabe spent part of every summer at the Chautauqua Institution, enjoying from the porch of the Maple Inn a circle of friends who returned year after year.

In lieu of flowers, donations may be made to St. Michael's School, 214 Keuka Street, Penn Yan, New York 14527, to support library and art programs.

To order memorial trees or send flowers to the family in memory of Mabe Sorensen, please visit our flower store.