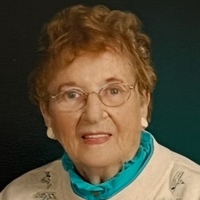 Mary June Dickinson, of Penn Yan and formerly Cooperstown, was a beloved great-grandmother, grandmother, mother, mother-in-law and wife during her incredible 99 (almost 100) years of life. She went to be with her Lord peacefully on May 3, 2022. She was affectionately known as “Mama” to her family and many friends.

Mary was born June 25, 1922 to Charles and Louise (Carey) Klein in New York City and was educated there. She met her husband, Pershing Dickinson, who was stationed with the United States Army Band at Fort Monmouth, New Jersey, and they were married June 27, 1943. She was always proud of her New York City roots, and a steadfast example of someone who lived during the “Greatest Generation”. She was patriotic and loved God and her country, her entire life.

After World War II ended, Mary and Pershing settled in the charming village of Cooperstown, NY where Pershing was a Music Teacher at Cooperstown Central School.  Later, Mary worked as the Secretary to the Principal at Cooperstown Elementary School-a job she held and loved for 25 years.  They both cherished their years living in the town known as “The Home of Baseball”, raising their two children.

They were both faithful and active at the Cooperstown United Methodist Church, where Mary served as a Trustee and Superintendent of the Sunday School, while Pershing directed the Church Choir and was Lay Leader.

She was a 73-year member of the Order of the Eastern Star, serving many offices, including Matron and Grand Representative to British Columbia.

After her beloved husband passed away in 2005, Mary relocated to Penn Yan, NY to be near her family.  She adjusted well to her move and new home at Walnut Hill and then at St. Mark’s Terrace.  She was a member of both the Penn Yan United Methodist Church and the Cooperstown United Methodist Church where she made many friends.  She loved getting together for coffee with her special friends and playing Bingo at St. Mark’s.

Above all, Mary loved spending time with her family.  Mary is survived by her daughter, Nancy Francis and her husband Rodger, of Penn Yan.  Her daughter-in-law, Suzanne Dickinson of Colonie; grandchildren, Rhonda (Michael) Simonelli of Hilton, Jeffrey (Erin) Francis of Penn Yan, Kimberly (Sam) Aceti of Grand Island, and Michael (Erin) Dickinson of Glens Falls.  Her adoring great-grandchildren, Luke, Ella, and Iris Mary Simonelli, Patrick and Elliot Francis, and Melina and Marissa Aceti; one sister-in-law, Georgina, of Scottsdale, Arizona, and several nieces and nephews. We will miss her more than words can say.

A Celebration of Life will be held at the Penn Yan United Methodist Church on what would have been Mary’s 100th Birthday, on Saturday, June 25, 2022 at 2:00pm.  Burial and a graveside committal services will take place in Hartwick Seminary Cemetery in Cooperstown on Sunday, May 22 at 2:00pm.

The family wishes to express their deepest appreciation to Nurse Karen Strickland and to Donna Nielsen and the volunteers at the Keuka Comfort Care Home.

Please visit www.WeldonFuneralHome.com to send a message of condolence to Mary’s family.  Arrangements are with Weldon Funeral Home, Penn Yan.

To order memorial trees or send flowers to the family in memory of Mary June Dickinson, please visit our flower store.