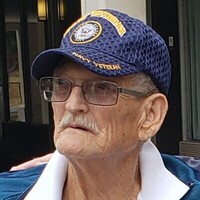 A graveside service will be held Saturday, July 24, 2021 at 11:00am at Glenwood Cemetery, 100 Cemetery Street, in Watkins Glen (bottom entrance)

Mick graduated from Dundee Central School in 1962. He was drafted by the Cleveland Indians but had to report to Active Duty in the US Navy from 1963 to 1965, where he served on the USS Essex.  He worked for International Salt in Watkins Glen for 40 years until he retired in 2005.

He served 3 terms as Governor and Treasurer for Moose Lodge #426; Treasurer and member of Tyrone Fire Dept., and AMVETS Post #2278; lifetime member of Elks Lodge #1546, VFW Post #8649 in Watkins Glen, and a member of American Legion Post #660 in Dundee.

Mick was predeceased in death by his parents Robert and Alberta McClain. Wife of 30 years Ellen, brother’s Carlton, David and Thomas McClain; stepson Todd Pike; and his beloved sidekick, Jax.

Mick enjoyed spending time with his great-grandchildren.  They kept him going, from racing in his wheelchair, to giving rides.

To order memorial trees or send flowers to the family in memory of Merrield "Mick" McClain, please visit our flower store.