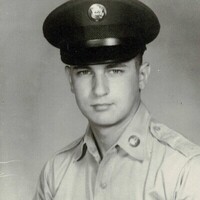 The family will receive friends and relatives at the Weldon Funeral Home, 102 E. Main St. Penn Yan, on Friday, August 5, from 11am-1pm; followed by a memorial service at 1pm.  A committal service with military honors will be held at Lakeview Cemetery at 2:15pm; followed by a reception.

Robert was born in Penn Yan on November 22, 1943, the son of the late Ivan and Helen Drew.  He was also predeceased by an infant son, Michael Ivan Drew, stepson William Christensen, and sons-in-law, A. Jay Vermilye and Chuck Long.

Bob was a member of the of the Penn Yan American Legion and VFW.  He served in the US Army in Vietnam.  He worked at Birkett Mills in Penn Yan for many years.  He enjoyed spending time with family and friends, playing cards, NASCAR, and hunting and fishing.

To order memorial trees or send flowers to the family in memory of Robert Ivan Drew, please visit our flower store.