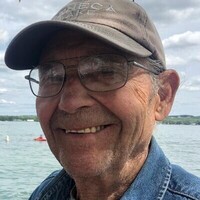 Due to the forecasted weather, the memorial service has been rescheduled.  A Memorial Service will be held at the United Methodist Church in Penn Yan, NY on Saturday, February 5, 2022 at 1 pm.

His battles with serious medical issues showed his courage and strength in facing life’s challenges with a smile and a resolve to continue to live life to the fullest. Siggie came out a hero with a special loving heart that cared for many in his own unique way.

Siggie met the love of his life, Helga, at a beachside restaurant at Rockaway Beach in NY, where Helga worked in the summer as a waitress. It was love at first sight and together they built a life. Siggie worked as a print press operator and foreman after attending the New York City School of Printing. He served in the US Army from 1961 – 1963.  Sig and Helga married in 1964, and after a few years moved to rural northwest Connecticut to start a family. As an avid outdoorsman, Siggie would spend as much time as possible on the boat or in the woods. High priority throughout his entire life was to provide a secure and loving home for his family. Upon retiring in 2001, Siggie and Helga moved to Penn Yan, in Western New York where he and Helga enjoyed 20 years fishing for lake trout on Seneca Lake and of course swimming laps at the YMCA regularly. Siggie had a special way of anticipating the challenges of family and friends, never hesitating to thoughtfully offer a caring, helping hand whenever he could.

Siggie is survived by his wife Helga and his two children, Eric (and his wife Marianne) of Duxbury, MA, and Jennifer (and her husband Robert) of Hinesburg, VT. He was a proud and beloved grandfather, known as “Opi” to his five grandchildren, Grace, William, Thomas, Holly and Ginny.  He was predeceased by his brother’s Ham, Ernest, Paul and sister, Elsie. He is survived by his brother’s Donny, Walter, Herb and Alfred and sister’s Ruth, Christel, Emmie and Lydia.

A private burial is planned at City Hill Cemetery in Torrey, NY.  Memorial donations in his memory may be made to the United Methodist Church in Penn Yan, NY.  Arrangements with Weldon Funeral Home, Penn Yan.

To order memorial trees or send flowers to the family in memory of Siegfried "Siggie" Poreda, please visit our flower store.