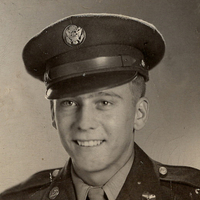 He was born in Lansford, PA on November 4, 1923, the son of Stephen W. Dolak Sr. and Alice (Perzel) Dolak.  He served as a radio operator on planes in WWII, serving in Europe, Africa, England and the United States.  After the war, he studied and graduated at Juniata College and received his master's degree from Penn State University.  In his early years, he worked as a chemist for the Pennsylvania Railroad Road.  Soon, he found his career in education and retired in 1993 as a Chemistry Teacher with Altoona Area High School in Altoona, PA.  In his later years, he was an instructor for Juniata College Science in Motion program.  He continued to enjoy his passion for flying until his later years, piloting his Cessna 172 Skyhawk. Also, he was active for many years at the Altoona Area Employees Federal Credit Union.

He is survived by his sons, Stephen W. Dolak III (wife Susan) of Branchport, Kirby (Pat) Dolak of Littleton, Mass., and Scot (Penny) Dolak of Huntingdon, PA; former wife and friend, Jean Frank; and five grandchildren, Kelly, Krista, Tyler, Kendall and Kate, and 2 great-grandchildren, Alexa and Hannah.  He was predeceased by his brother and sister, Kenneth Dolak and Alice Thornburg.

He will be interred at Bitley Cemetery in Branchport. A Celebration of Life with friends and family will be held at a later date.

You may express your condolence or share a memory with his family by visiting his obituary at www.WeldonFuneralHome.com. Arrangements entrusted to Weldon Funeral Home, Penn Yan.

To order memorial trees or send flowers to the family in memory of Stephen W. Dolak II, please visit our flower store.