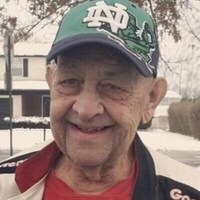 A graveside service and committal will be held Tuesday, June 21 at 10:00am at St. Michael's Cemetery in Penn Yan.

He was preceded in death by loving wife, Donna Morse, and parents Vernon and Ruth Morse.

Vernon was a devoted husband, father, grandfather, and friend. He retired from Butler Co. after 40 years. He and his wife, Donna, were devout Catholics and belonged to St. Pauls' in Westerville. Vernon had several hobbies including watching sports (Norte Dame, Chicago Cubs, and NASCAR), coin collecting, and traveling with wife Donna.

Donations may be made to a charity of one's choice.  Local arrangements with Weldon Funeral Home, Penn Yan.

To order memorial trees or send flowers to the family in memory of Vernon Charles Morse, please visit our flower store.